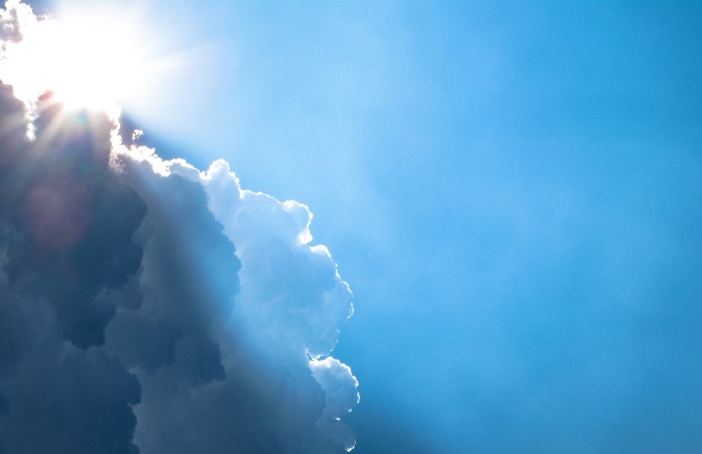 In the last 30 years or so, even minimal sun exposure has been actively discouraged. Widely promoted by the MSM, fear of the sun has seeped into the consciousness of far too many people on this planet, driving them away from the one thing that can actually reduce their chances of disease.

Paramahansa Yogananda knew the true healing benefits of the sun. Not only did he encourage frequent sun baths in Autobiography of a Yogi, he understood the life-giving potential of the sun’s rays:

Except from chapter 39 of Autobiography of a Yogi:

Therese greeted me with a very gentle handshaking. We both beamed in silent communion, each knowing the other to be a lover of God.

Dr. Wurz kindly offered to serve as interpreter. As we seated ourselves, I noticed that Therese was glancing at me with naive curiosity; evidently Hindus had been rare in Bavaria.

“Don’t you eat anything?” I wanted to hear the answer from her own lips.

“No, except a consecrated rice-flour wafer, once every morning at six o’clock.”

“How large is the wafer?”

“It is paper-thin, the size of a small coin.” She added, “I take it for sacramental reasons; if it is unconsecrated, I am unable to swallow it.”

“Certainly you could not have lived on that, for twelve whole years?”

“I live by God’s light.” How simple her reply, how Einsteinian!

“I see you realize that energy flows to your body from the ether, sun, and air.”

A swift smile broke over her face. “I am so happy to know you understand how I live.”

While I think Vitamin D supplementation is helpful, I don’t think it’s quite as beneficial as soaking up the actual rays of the sun. I’m not talking about frying yourself; I’m talking about spending 15 to 20 minutes in the sun, three to four times a week.

I think the sun has the power to recharge our bodies in ways traditional science doesn’t yet comprehend. And I believe the power of the sun is behind the secret of yogis who are able to live without food and water for decades. Shine on!

By Marco Torres – Humans Are Free

A causative link between the sun and cancer does not exist and never has.

The cancer and sunscreen industries have made it their mission to convince the world that sunlight is a primary cause of skin cancer, when in fact it has been shown to prevent it and many other forms of cancer.

It is a common sight these days to come across girls riding their two-wheelers and scooties, all covered up to avoid the sun’s rays on their person.They even wrap a stole around their faces, so that not an inch of their face is seen, and wear gloves to keep the sun away from their skin.

Experts say that despite living in a tropical climate, it is unfortunate that many don’t expose themselves to the sun to get the RDA (recommended daily allowance) of vitamin D.

According to nutritionist Dharini Krishnan, we don’t expose ourselves enough to the sun:

“This results in vitamin D deficiency as sunlight is the only major source of vitamin D. All we need to do is stand under the sun for 15 minutes at least three times a week.

“Our lifestyle is lethargic and we depend a lot on air conditioners. It is good to get exposed to the sun from 10 am to 4 pm to get the needed vitamin D for our body.”

Sunlight does not Cause Skin Cancer, it’s your best defense against cancer

Exposure to ultraviolet B radiation in sunlight provides the mechanism for more than 90% of the vitamin D production in most individuals.

The widespread use of sunscreens, particularly those with high sun protection factors (SPF), may lead to a significant decrease in solar-induced previtamin D3 in the skin, resulting in a vitamin D level which is insufficient for protection against a wide range of diseases.

There are well over 800 references in the medical literature showing vitamin D’s effectiveness — both for the prevention and treatment of cancer.

The results, published in the American Journal of Epidemiology, showed that women who had at least 21 hours a week exposure to the sun’s UV rays in their teens were 29 percent less likely to get cancer than those getting under an hour a day.

For women who spent the most time out side in their forties and fifties, the risk fell by 26 percent and for those over 60, sunshine halved their chances of a tumor.

Exposure to sunlight and ultraviolet light has been repeatedly shown to not be the cause of skin cancer.

Scientists from The University of Texas MD Anderson Cancer Center reported UVA exposure is unlikely to have contributed to the rise in the incidence of melanoma over the past 30 years.

For melanoma, it is only latitudinal variation that favors the hypothesis of sun exposure causation. It is postulated that skin temperature by itself may suffice to account for the observed variation of melanoma with latitude.

The higher incidence of melanoma in the higher social classes and its increasing incidence with age may be readily explained by the hypothesis that melanoma incidence increases with increase in skin temperature which scientists have incorrectly linked to the sun as the primary causative factor.

No scientific literature has ever proven that sunlight causes cancer in human beings. Most studies that have attempted to find a cause have only found correlations and many scientists have established the toxicity level of the human body, which reacts with the UV spectrum, is what causes cancer – not the sunlight itself.

It’s been known that vitamin D can prevent the genetic damage the leads to cancer. When vitamin D binds to specific receptors, it sets off a chain of events by which many toxic agents, including cancer cells, are rendered harmless.

However, if there is not enough vitamin D the system can become overwhelmed and cancer can develop.

“This is one of the reasons that people living closest to the equator have a much lower incidence (or absence) of specific cancers, which consequently increase in locations further from the equator,” said McGill professor Dr. John White.

Dr. Anthony Petaku who studies the effects of Vitamin D2 and D3 on mutating cells says the incidence of disease increases the further away we are from the equator.

“The millions of people who live near the equator are not susceptible to the same level of disease or even the same diseases as those who live further from the equator,” he stated.

Dr. Petaku has found that latitude studies which are observational on vitamin D and disease show a clear correlation between solar UV radiation, latitude and vitamin D status.

“Almost every disease decreases in frequency and duration as we move towards equatorial populations, and the data shows that there is a minimum of a 1000 percent increase for many diseases in countries furthest from the equator…” he concluded.

Although vitamin D can be obtained from limited dietary sources and directly from exposure to the sun during the spring and summer months, the combination of poor dietary intake and sun avoidance has created vitamin D deficiency or insufficiency in large proportions of many populations worldwide.

It is known that vitamin D has a wide range of physiological effects and that correlations exist between insufficient amounts of vitamin D and an increased incidence of a number of cancers.

These correlations are particularly strong for cancers of the digestive tract, including colon cancer, and certain forms of leukemia.

Both UVA and UVB can cause tanning and burning, although UVB does so far more rapidly. UVA, however, penetrates your skin more deeply than UVB.

UVB appears to be protective against melanoma — or rather, the vitamin D your body produces in response to UVB radiation is protective.

As written in The Lancet:

“Paradoxically, outdoor workers have a decreased risk of melanoma compared with indoor workers, suggesting that chronic sunlight exposure can have a protective effect.”

More than three-fourths of people with a variety of cancers have low levels of vitamin D, and the lowest levels are associated with more advanced cancers.

People with levels below 24 ng/mL were nearly three times more likely to have stage III cancer than those with higher vitamin D levels.

Criteria for different stages differ by type of cancer. But in general, stage III indicates more extensive disease than lower stages: larger tumor size and/or spread of the cancer beyond the organ in which it first developed to nearby lymph nodes and/or adjacent organs.

The Best Source of Vitamin D

In their experiments, they showed that low levels of Vitamin D, comparable to levels found in millions of people, failed to inhibit the inflammatory cascade — a series of rapid biochemical events that propagates and matures the inflammatory response.

However, levels considered adequate did inhibit inflammatory signaling. They reported their results in the March 1, 2011, issue of The Journal of Immunology.

In the absence of Vitamin D from sunlight, disease increases more than 1000 percent. Experts suggest that the chances of getting vitamin D from your diet are very low.

And if you are a vegetarian, it is all the more difficult to gain vitamin D. What they repeatedly suggest is exposure to sunlight is the best source of vitamin D.

“Besides milk products and mushrooms, a vegetarian diet does not contain much of vitamin D. Make sure to include ghee, butter and paneer,” says Dr Tusna Park, author of A New Way To Eat.

“Nothing can be better than the sunlight. So make sure to spend 20 minutes in the sun every day, any time between 8am and 4pm, without the application of sunscreen lotion. We can apply some coconut oil (which is mixed with water) to the exposed body parts.

“Keep windows open so that sunlight enters your house; walk in the sun every day, if possible; sit in an open balcony or on the terrace for 20 minutes every day so that you can receive adequate sunlight.”

Lack of vitamin D may cause some serious bone-related health issues.

“Severe deficiency could also cause improper activity of the parathyroid gland and result in convulsions. Unfortunately, food cannot replace the sun and doesn’t give us enough vitamin D. However, vitamin D is present in small amounts in fish oils, ghee, eggs and butter.

“As vitamin D is produced from a substance beneath the skin, when sunlight falls on the surface of the body we must expose ourselves to sunlight every day.”

Vitamin D supplementation will clearly never match natural sunlight and it’s time researchers and scientists started taking a more serious approach to large populations studies on UV exposure and vitamin D status so the world can better ascertain the true effect of the sun versus supplementation.